The driver's airbag is made up of several components. A cylinder filled with gas, the steel housing, airbag pack and the vinyl airbag cover. When the airbag module receives a deployment signal the igniter switch starts a chemical reaction which then inflates the airbag pack in fractions of a second. See chemistry of airbags. 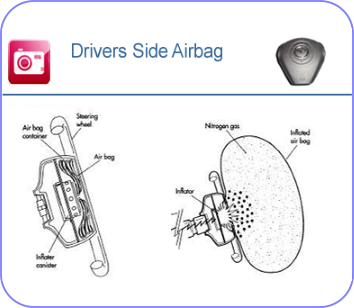 There are many types of driver airbags. The most popular are shown above. The single stage-airbag has a single plug or connector and a dual-stage has two plugs with four wires that leads to a single connector. Also, there are three spoke and four spoke driver side airbags. See illustrations above for an example of the two. 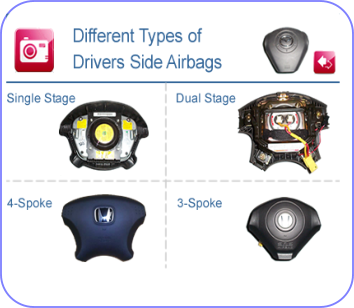 Virtually all new cars have airbags, and they’re saving lives. They’re reducing driver deaths by about 14 percent, and passenger bags reduce deaths by about 11 percent. People who use safety belts may think they don’t need airbags. But they do. Airbags and lap/shoulder belts work together as a system, and one without the other isn’t as effective. Deaths are 12 percent lower among drivers with belts and 9 percent lower among belted passengers.

Airbags Provide Additional Protection for People who use seat belts.

The Future of Airbags

The future is advanced airbags. Most new models have redesigned airbags, and future airbag technologies will reduce the risk even among people who have moved forward before airbags inflate. Sensors will detect rear-facing restraints and automatically switch off passenger bags. Inflation rates will be tailored to crash severity. More advanced airbags could recognize people’s positions just before inflating and reduce the force if someone is in a position to be harmed.

The position is what counts, serious inflation injuries occur primarily because of people’s positions when airbags first begin inflating. Anyone, regardless of size or age, who’s on top of, or very close to, an airbag is at risk. Most airbag deaths have involved people who weren’t using belts, were using them incorrectly or were positioned improperly. People without belts or using them incorrectly, especially passengers, are at risk because they’re likely to move forward during hard braking or other violent maneuvers before crashes. Then they’re likely to be very close to, or on top of, airbags before inflation begins. Improperly positioned people at risk include drivers who sit very close to the steering wheel — 10 inches or closer — and infants in rear-facing restraints in front seats. Understanding that airbag injury risk is related to position leads to a few simple steps that can eliminate the risks without sacrificing airbag benefits.